From 1887 to 1889, Oscar Wilde was appointed editor of The Woman's World, a fashionable magazine for upper middle-class women. The magazine, published by Cassell & Co., was originally titled The Lady's World and first published in 1886; under Wilde's editorship, however, the magazine underwent a substantial visual and intellectual transformation. The scope of The Woman’s World was no longer constrained to fashion reports and commercial advertisements, but rather widened to include debates on issues central to women’s socio-political status, historical and contemporary. Furthermore, Wilde solicited well-known women to contribute, including the suffragette Millicent Fawcett Garrett; the baroness Lady Mary Jeune; Queen of Romania Carmen Sylva; and authors Edith Nesbit; Amy Levy; Olive Schreiner; and Ouida. The wide scope of contributors and content lent itself to a lack of coherence:  contradictory arguments are threaded through its pages, and wholly dissimilar articles appeared side by side. By exploring continuities and contingencies within The Woman’s World, this project seeks to expose the multiple modes of “womanhood” in conversation at the time.

The Digital Woman’s World aims to preserve the text of a publication critical to nineteenth-century periodical studies, women’s writing and history, and Wilde studies. Eventually, the edition’s goal is to encode the complete text Woman’s World (1887), accompanied by high-resolution scans of the magazine’s internal images and article pages. Annotations will be completed by a variety of contributors, emphasizing the variety of readers who may have accessed The Woman’s World. The annotations showcase the depth of critical discourse and knowledge contained within article, while tag sets categorize articles by keywords and authors to model the types of content typically solicited. By granting access and inviting contributions to this historically-rich material, The Digital Woman’s World is a tool for scholars, educators, and students.

No featured collections are available.

The Author of "John Halifax, Gentleman" 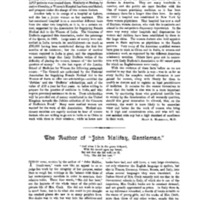 A biography of Dinah Craik, including Craik's views on the progress of women and on novel writing. 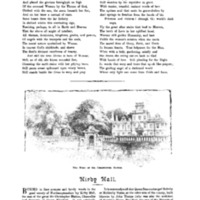 A history of the Elizabethan country house, Kirby Hall, owned by the Lord Chancellor to Queen Elizabeth I. It describes the typical grandeur of the… 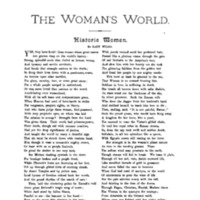 A free verse poem that discusses women's moral strength and religious convictions throughout history. The women discussed are significant in history,…